Diving into the different views of management control

Internal and external factors influence the level of achieving Goal Congruence. Informal factors are inherit to an organisation, but not formally defined. It could be the culture of the organisation or the way of communication.

External factors can be formal or informal. Informal external factors are things that define expected behaviour without being formalised in laws or policies. For example regional expectations on lunch times and duration. A lunch meeting in the Netherlands is short and concise, where a lunch in Barcelona takes way longer.

Formal systems play a role in the planning and control cycle of an organisation. These formal systems can be categorised in management control systems. For example budget and balanced score card.

The management trilogy (Schepers and Franssen, 2010)

Central to the view of these authors is the instrumental approach. Putting the planning & control cycle at the core of its trilogy. As such it is much a single-dimensional view of management control.

This view strongly overlaps with the view of Anthony and Govindarajan. Both are centred around an instrumental approach to management control. The three pillars need to form a balanced whole with each other to perform well. 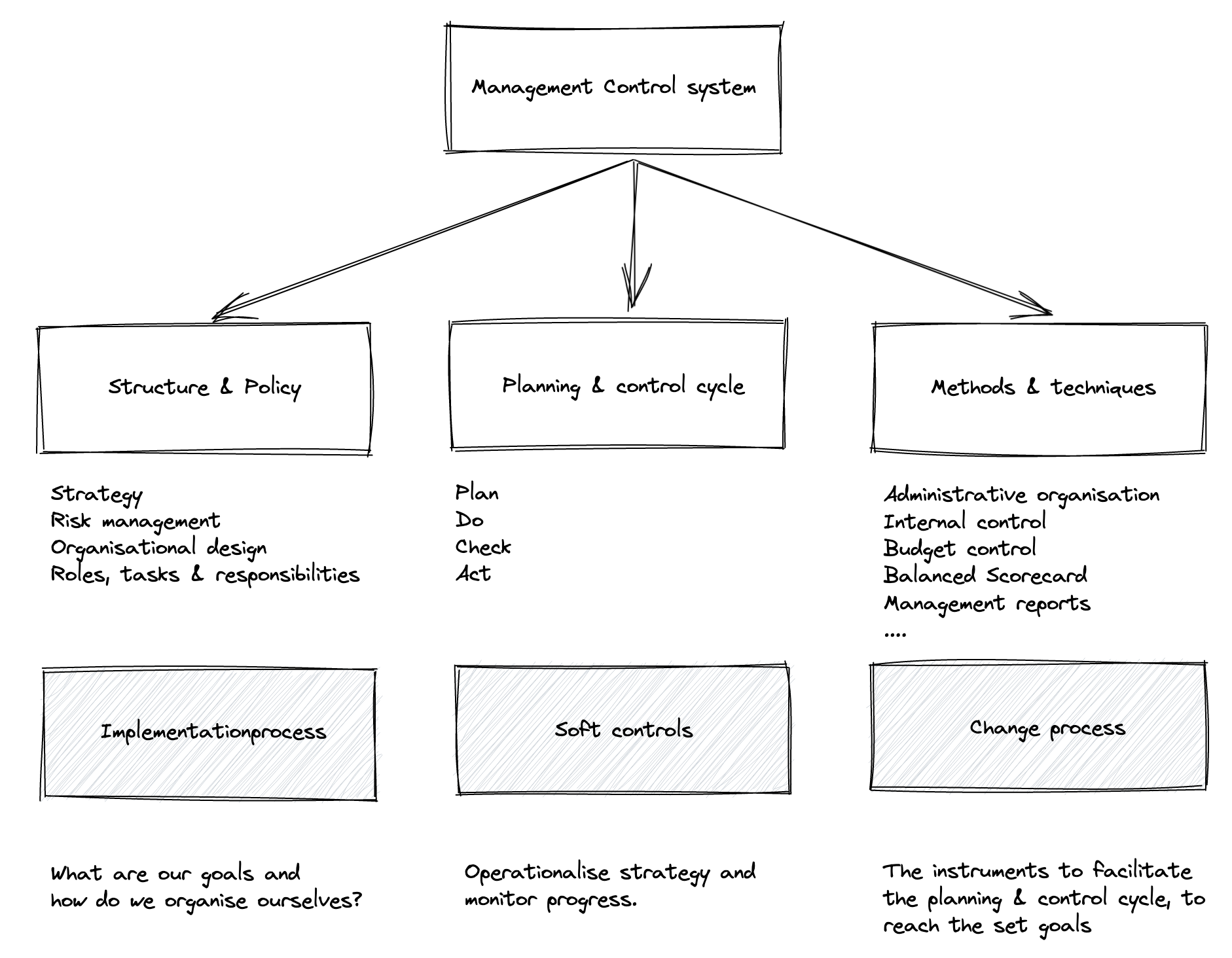 This trilogy overlaps in many ways with the view of Anthony and Govindarajan:

Using this trilogy can be valuable to discover a baseline of management control at the organisation. Four questions are important for discovering this baseline:

Are our employees to behave appropriately?

They break down this question into several parts:

Related to the problem of Goal Congruence, this view focusses on the job of managers to ensure that employees do what's best for the organisation. As such it is highly oriented around behaviour.

A couple of causes to management control problems are:

Any of these three problems are addressed by an effective management control system. Which is almost inevitable in any complex organisation. Good control is described by the authors as:

management can be reasonably confident that no major unpleasant surprises will occur.

Important characteristic of good control is that it is future-oriented. It's about prevent unpleasantness in the future. Next to that it has to be objective-driven. As objectives describe the objectives the organisation wants to achieve.

Results controls are an indirect form of control. These controls do not directly target the actions or decisions of the employee. The goal is to influence the employee to work towards the desired results, which is being rewarded. Pay-for-performance is an example of a results control. Promotion or recognition being other, non-monetary examples. Results controls support in creating meritocracies, an organisation where rewards are given to the most talented and hardest working employees.

In order to foster and organise decentralised forms of organisation, results control yield large success. By focussing on desired results. the autonomy and local decision-making how to get to the result could be made by the decentralised function, whilst senior management was in control of results and performance.

Effectiveness of results is judged by the ability of evoking the desired behaviours. To do so a measure has to be:

Action controls can be of one of four different forms:

All action controls have the purpose to prevent any future problems. Only the accountability controls also have a detection function. For example in the case of compliance audits.

In order to make action controls effective, the following conditions have to be present:

Personnel controls extent the normal behaviour of humans to control or motivate themselves. These form of controls serves three purposes:

Implementation of these controls can be achieved via:

Cultural controls are designed to encourage mutual monitoring. These form of control is most effective where members of a group have social or emotional ties to each other. Organisational cultures can be shaped in many ways. The authors mention the following methods:

Control in an age of empowerment (Simons, 1995)

Diagnostic control systems are like the dials in airplane cockpit. The display how systems and critical indicators are performing, allowing the pilot to make critical adjustments when required. This form of control is in great use at many organisations. It is being used to monitor goals and allow to generate feedback to adjust where required. Although these systems are great to indicate performance, they are not effective control measures. They can create pressure on the ones responsible for the goals and cause control failures.

Belief systems display the key tenets of the business, how the organisation creates value. They are inspirational and concise. Examples are "best customer service of the world" or "pursuit of excellence". It takes everyone involved to actually live the values. Actions of senior management and employees need to be aligned with the belief system and deeply rooted. Formal belief systems help the employees to understand the core values and place of the business, especially in large, decentralised organisations. Belief systems can inspire employees to discover new ways of creating value.

Boundary systems based on a management principle of "the power of negative thinking", boundary systems describe what employees should not be doing. In favour of telling employees what to do managers should tell them what not to do, and allow creativity to thrive for the things they should be doing. Allowing for innovation, but within clearly defined limits. An example of a boundary systems is a list of projects a construction company should stay away from as they learned it are not profitable projects.

Collectively using these controls set in motion powerful forces that reinforce each other.

Traditionally the financial performance is predominantly measured, the 1980's sparkled a focus on non-financial elements of the organisation. Two main strands of arguments can be found in the rush of new publications:

The authors describe two main elements of a performance measurement system: a) responsibility and b) rewards and compensation.

Rewards are meant to influence the behaviour of the organisation towards the desired outcome as measured by the performance system. It requires deliberate design to ensure that rewards lead to the best interest of the organisation. Three important attributes are defined by Fitzgerald (2007) for a reward system:

The traditional approach of responsibilities and incentives has received it's share of criticism. It assists managers in their planning & control approach. However, it leads toward a narrow economically rationalised approach. Critics pointed out that this system would lead to individualisation effect. Leading to a system where colleagues are in competition with each other. The predominance of financial measures forms another angle of criticism, one that led to the rise of using more non-financial measures.

When choosing performance measures it is important to consider:

The practice of performance management is concerned with defining, controlling, managing both the achievement of outcomes or ends as well as the means used to achieve these results at a societal and organisational, rather than individual, level. Performance management is centred around three questions. Questions that relate to the strategic objectives of an organisation:

Given the dimensions that an organisation wants to develop targets need to be set. Fitzgerald (2007) argues that establishing these targets require:

Otley developed a framework to design an performance management system based on 12 questions to ask. Performance Management Systems Framework.

About the consequences of performance measurement (Power, 2004)

Reductionism is inherently part of measuring in order to get to countable units. In order to count things the most common similarities need to be emphasised and less common ones ignored. For example: horses are not individual identical, but in order to count them we reduce them the classification as a horse. The acceptance of such a unit is defined by the day and age, and culture one is part of. With regards to organisations performances are measured without the presence of suitable instruments. This is a kind of an imperfect match between the available instruments and the precision of the thing one wants to measure.

Critics of accounting and other performance measurement systems argue that complex entities can't be rightfully measured due to reductionism. This are forced to be measured which are actually can't be measured. As a result it provides a feeling of reliability that should be called apparent reliability.

Relation between monitoring and control performance measurement systems imply that different actors with the same data and technology would yield the same performance. Called administrative replication. However, who applies the technology is important to legitimate a result.

Although measurements offer a common language and framework for judgement, it also has downsides.

Performance measurements allows for negative manipulation. This manipulation can be done in different ways as van Dooren (2006) displays.

Manipulation of measurement can be done via:

In the case of manipulation of output it could be that the measurement is perfect. but that the thing observed has changed. This could be caused by:

de Bruijn dives into the performance management from the viewpoint of output and outcome. Output is targeted at the direct effects of the government interventions that can be measured directly. @@Outcome is centred around the long-term effects of the interventions.

Output measurement is primarily targeted on the product perspective. Regarding product management the author notices a number of positive and perverse effects.

The perverse effects lead to a distorted view of the professional performance. The complexity is drastically reduces and leads to problematic judging. Three mechanisms are at play here:

Just like product management perverse effects occur in process management. @@@Non-intervention principle occurs. The expectation of a professional that another professional does not interfere with its work

As a result it reduces the incentives for perverse behaviour and mushrooming. Allowing room for out ome figures next to pure output features.

Effects on use of performance measurement systems in the public sector (Speklé & Verbeeten, 2014)

🏛️ About design and control of organisations

Diving into the different views of management control